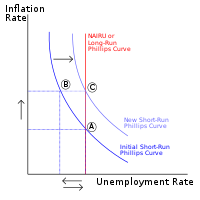 While there is a short run tradeoff between unemployment and inflation, it has not been observed in the long run.[1] In 1968, Milton Friedman asserted that the Phillips curve was only applicable in the short-run and that in the long-run, inflationary policies will not decrease unemployment.[2][3] Friedman then correctly predicted that in the 1973–75 recession, both inflation and unemployment would increase.[3] The long-run Phillips curve is now seen as a vertical line at the natural rate of unemployment, where the rate of inflation has no effect on unemployment.[4] Accordingly, the Phillips curve is now seen as too simplistic, with the unemployment rate supplanted by more accurate predictors of inflation based on velocity of money supply measures such as the MZM (“money zero maturity”) velocity,[5] which is affected by unemployment in the short but not the long term.