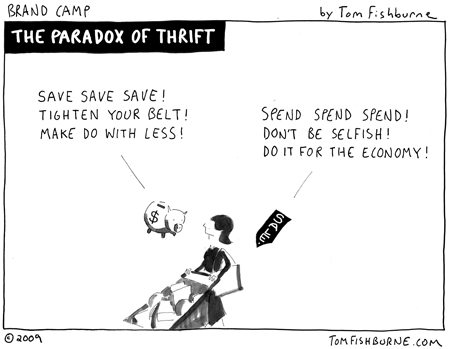 What is the ‘Paradox Of Thrift ‘

The Paradox of Thrift, or paradox of savings, is an economic theory which posits that personal savings are a net drag on the economy during a recession. This theory relies on the assumption that prices do not clear or that producers fail to adjust to changing conditions, contrary to the expectations of classical microeconomics. The Paradox of Thrift was popularized by British economist John Maynard Keynes.

BREAKING DOWN ‘Paradox Of Thrift ‘

According to Keynesian theory, the proper response to an economic recession is more spending, more risk-taking and less savings. Keynesians believe a recessed economy does not produce at full capacity because some of its factors of production — land, labor and capital — are unemployed.

Keynesians also argue that consumption, or spending, drives economic growth. Thus, even though it makes sense for individuals and households to cut back consumption during tough times, this is the wrong prescription for the larger economy. A pullback in aggregate consumer spending might force businesses to produce even less, deepening the recession. This disconnect between individual and group rationality is the basis of the savings paradox.

The first conceptual description of the Paradox of Thrift may have been written in Bernard Mandeville’s “The Fable of the Bees” (1732). Mandeville argued for increased expenditure as the key to prosperity, rather than savings. Keynes credited Mandeville for the concept in his book “The General Theory of Employment, Interest and Money” (1936).

Keynes helped revive the so-called “circular flow” model of the economy. This theory says an increase in current spending drives future spending. Current spending, after all, results in more income for current producers. Those producers rationally deploy their new income, sometimes expanding business and hiring new workers, each of whom earns a new income which, in turn, may be spent.

Finally, the Paradox of Thrift ignores the potential for saved income to be lent out by banks. When some individuals increase their savings, interest rates tend to fall and banks make additional loans.

Keynes met these objections by arguing Say’s Law was wrong and prices are too rigid to adjust efficiently. Economists remain divided about sticky prices. It is widely accepted that Keynes misrepresented Say’s Law in his refutation.