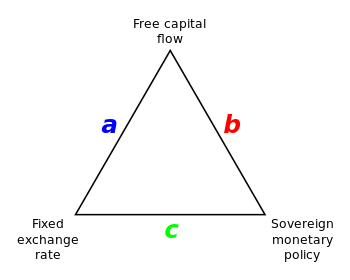 The Impossible trinity (also known as the Trilemma) is a trilemma in international economics which states that it is impossible to have all three of the following at the same time:

It is both a hypothesis based on the uncovered interest rate parity condition, and a finding from empirical studies where governments that have tried to simultaneously pursue all three goals have failed.

According to the impossible trinity, a central bank can only pursue two of the above-mentioned three policies simultaneously. To see why, consider this example: